Leadership Pioneer Tichy Encourages Students to “Get Out and Get Involved.” 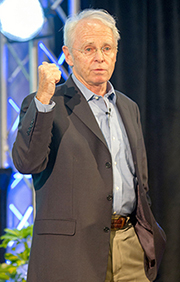 “Get out in the field. Become involved and stay involved,” said Noel M. Tichy, professor of Management and Organizations at the University of Michigan. He spoke as part of The Leadership Lectures series presented by The Center for Leadership at Florida International University (FIU).When it comes to developing leadership skills, experience may be the best teacher.

“Explore your own qualities as leaders by being part of business opportunities,” he told the standing-room-only group of 160 people, gathered in the FIU’s College of Business Complex on June 4, 2013. “Getting involved in solving social problems is often the best way of discovering your leadership style.”

Modesto Maidique, president emeritus of FIU and executive director of FIU’s Center for Leadership, introduced Tichy as “one of the top five leadership scholars in the world.”

Long before it was popular, Tichy was a pioneer in taking leaders abroad, to explore business opportunities as well as economic and social challenges. He is known for bringing this leadership concept to General Electric’s Crotonville, the oldest corporate university in America.

His philosophy motivated him in the early 1990s to challenge all 481 new MBA candidates at Michigan to do community service. He reported to the audience that 80 percent still do.

“Put people in situations where they have to make judgments and then give them feedback,” he said, adding that it’s still important to do the fundamental intellectual work to get ready and then report on what you’ve seen.

Tichy, co-author of Judgment on the Front Line: How Smart Companies Win by Trusting Their People, stressed the importance of passing on leadership skills.

“Through experience, you’ll develop your own teachable point of view to pass to others,” he said. “Any good leader is responsible for developing the next generation of leaders.”

This lecture included a lively question and answer session and an exercise during which participants worked in pairs to articulate their values and teachable points of view. He also signed books for many in the audience.

The Leadership Lectures are sponsored by Mercantil Commercebank.