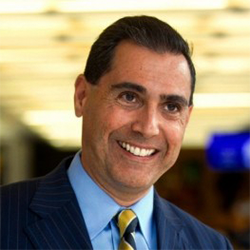 A graduate of Cornell and Harvard, Manuel “Manny” Gonzalez, President of MGM Consulting, LLC, is the second term Chairman of the Board of the FIU Center for Leadership and a member of the Board of Directors of Alfalit International and GWA Holdings while also serving on advisory boards for companies in the banking and private equity industries. Mr. Gonzalez received a National Hispanic Health Foundation Leadership Award in 2014.