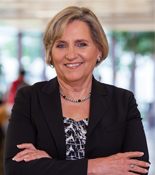 Florida International University’s Center for Leadership has rebranded its executive leadership program to bring it in line with the center’s other offerings.

The Women on the Move program, which completed its 10th annual program last month, is now known as The Women Leaders Program, said Dr. Joyce Elam, faculty director of the program and former executive dean of FIU’s College of Business Administration.

“The programming hasn’t changed that much,” she said. “All our other programs have had ‘leader’ or ‘leadership’ in the title, so we wanted this one to fit in more.” The new name, she said, also better reflects the purpose of the program, which is designed for senior managers, directors, vice presidents and executives who have a high level of responsibility.

“We keep attendance small because the sessions are very interactive,” Dr. Elam said; about 200 women have attended in its history. “We get a good group of women every year. A lot come from companies that we’ve built relationships with, who send women to us each year.

“This year, we brought in The Ariel Group, to do a session on leadership resources.” The Ariel Group, an international training and coaching firm, uses techniques from the theater to boost interaction and communication skills.

“They became a part of some of the other leadership programs we have,” Dr. Elam said, “and they were perceived so well by the students that we wanted to make them part of this one, too.”

Modesto “Mitch” Maidique, FIU’s president emeritus and current executive director of the Center for Leadership, said Women on the Move was the first program the center offered when it opened 10 years ago.

“Joyce filled in as acting director of the center as I was finishing my role as university president,” he said. “She got the center going and also started this program.”

“There was a recognition that men can be assured of having a lot of other men in any leadership program, but there would be only one or very few women. This program provides a context for women to share with other women.”

That may be changing. Dr. Maidique said he just finished conducting another leadership program in which half of those attending were women –a development that changes the dynamics of events.

“I was at Harvard Business School when they started to admit women,” he said, “and as soon as they made up about a quarter of a class, they became a very powerful force.”

Dr. Elam said more than half the undergraduate student body at FIU is female, and women comprise a very large percentage of professional MBA programs.

“Women are ready to move into higher levels of management,” she said.

“The MBA is still a very valuable degree to have, and it is required in order to progress in many fields.”

The perception of women in business is also changing, Dr. Elam said.

“I am a big believer in talent,” she said, “and if you have the talent, you are going to get opportunities. Women are learning how to be more assertive and how to be recognized for their talents. But often they are not as good at self-promotion as men. Now they are learning how to do that in a way they are comfortable with.”