The Future is Now! Miami Leadership Summit hosted by FIU's Center for Leadership.

"We are not starting from scratch; great leadership is here for us to rally behind, support, and to collaborate with." This was the remark of one of the invited community leaders at the Miami Leadership Summit held on January 17, 2012, and hosted by the Center for Leadership at FIU. The summit was the brainchild of FIU's President Emeritus, Modesto A. Maidique, and was one of the most important and productive meetings of recent years, gathering nearly 100 of Greater Miami's top business, community, and civic leaders.

A new direction for Greater Miami was the day's topic as dedicated business leaders, some of the area's most prominent, worked to develop specific ideas to position the region as a global competitor economically, culturally, and socially.

The springboard for the discussion was "Miami: Leadership in a Global Community," an insightful and fascinating case report distributed to the leaders in advance of the summit. The 40-page document not only chronicles the history of Miami's economic, cultural, and political development but also tackles important topics such as municipal isolationism, achieving prosperity and growth, and the legacy of leadership. Key data is also given in easy-to-absorb formats.

The authors of the report, Ken Lipartito, Modesto Maidique, Mayra Beers, and Candace Atamanik-Dunphy, based the report on the latest statistics and extensive interviews with many of Miami's most influential business, community, and civic leaders as it enters the second decade of the millennium. Jeb Bush, Armando Codina, David Lawrence, Daniella Levine, Donna Shalala, and H.T. Smith were among the many influential Miamians interviewed. 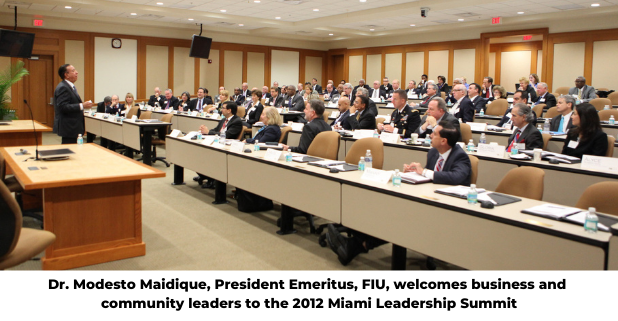 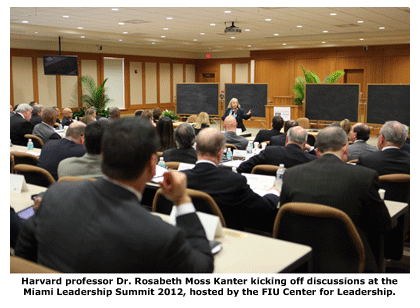 As the case outlines, a rare combination of events -including the opening of global trade, the loosening of financial regulation, and the favorable position of Miami as the geographical and cultural gateway to Latin America, provided Miami the opportunity to consolidate the gains made in its earlier years. Yet the city is faced with major challenges: ethnic fragmentation, municipal isolationism, civic and social division, poor educational outcomes, and complicated political drivers. Plus poverty continues, as 17 percent of Miami-Dade County's population lived below the federal poverty line in 2009, making it the fourth poorest urban area in the nation. In September 2010, Miami-Dade County's unemployment rate stood at 12.8 percent, compared to the national rate of 9.2 percent.

"The Miami Case provided an excellent starting point for our community's leaders to engage in a robust discussion of the trends shaping the future of Miami," said Mayra Beers, Director of Operations for the Center. "We were impressed by how everyone present could set aside any political, personal, or business agenda to truly work together."

This invitation-only event was co-led led by Harvard Business School professor and award-winning author Rosabeth Moss Kanter and Professor James Honan of the Harvard Graduate School of Education. Dr. Kanter summarized in four points what history and existing research show as being vital for the advancement of any city: 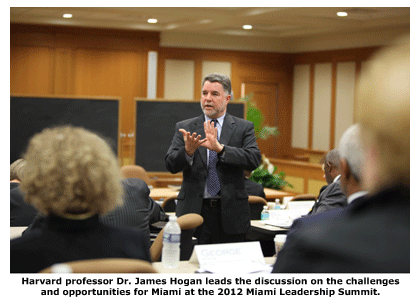 This latter point was echoed by Jim Angleton, President, AEGIS Financial Services, who suggested that "Business and community leaders should be the driving force behind what the city focuses on. We need to mobilize these individuals to meet and determine what is needed, what is best for our community, and then charge our elected officials with the execution of these decisions- rather than depending on the elected officials to come up with all the answers."

Another suggestion offered by Ricardo Forbes, Corporate Vice President & Chief Diversity Officer, Baptist Health South Florida, was to explicitly state "what's in it for us" by creating a values statement for the community. He pointed out that "what we are asking our community and our leaders to do to move the city forward is no small task, but the benefits are tremendous and we need to state those explicitly and ensure that our leaders see the benefits on a corporate as well as a personal level, otherwise they may not be motivated to act."

The summit marked the beginning of the difficult task of outlining achievable long term goals for the future of Miami.

"The Miami Leadership Summit was indeed an extraordinary event," reported Modesto Maidique as the event drew to a close. "Miami has a remarkable ability to reinvent itself as it embraces a constant influx of newcomers from around the world. The challenge of how Greater Miami can capitalize on its growing global reputation as a thriving cosmopolitan place to live and do business will require collaboration--and that collaboration was demonstrated by these leaders today."

The results of the Miami Leadership Summit are included in the report Miami: The Global City of the Future.