Working on the Razor’s Edge: The Challenge of Leading in High Stress Professions. 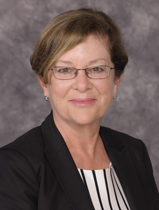 They have some of the toughest jobs on the planet. First responders. Hotline workers. Correctional officers. EMTs. Triage nurses. Working on the razor's edge, these employees in the public and private sectors and non-profit arenas, face a level of stress not found in ordinary careers. Handling interpersonal contact in often unsettling situations can be a frequent occurrence.

How these public servants interpret unwritten "feeling rules" and how they integrate them into the execution of their duties in crisis situations is the subject of Emotional Labor and Crisis Response: Working on the Razor’s Edge by Sharon H. Mastracci, Mary E. Guy and Meredith A. Newman (2012). Dr. Newman, Senior Associate Dean and Professor of Public Administration for Florida International University, is a fellow of the National Academy of Public Administration and serves on the Academic Advisory Board of FIU’s Center for Leadership.

Sharing research gathered through extensive face-to-face interviews, the authors explore the people who, in an instant, might be faced with panicked and traumatized victims. Emotional labor is described as “the effort within oneself to conjure appropriate feelings or subdue inappropriate ones, and the effort to induce particular feelings in another person or stifle other feelings.”

leadership, and emotional intelligence. “It has been made clear to us that emotional labor is an element of service work, whereas the rest are qualities of the worker that may contribute to the exertion of emotive effort,” Dr. Newman explains. Emotional labor therefore refers to the management of emotions and emotion regulation, both suppression and expression of emotions – all for the purposes of doing one’s job effectively.

The book was recently awarded the 2013 Best Book Award in Human Resource Management Research, Section on Personnel Administration and Labor Relations by the American Society for Public Administration.

The award winning book includes important information about those in leadership roles for emotional laborers.

“Leaders of these people need to acknowledge that the emotional labor in itself isa skill, just like being able to analyze a spread sheet,” reports Dr. Newman. 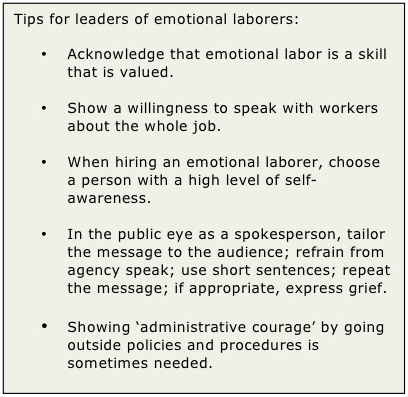 “Furthermore, managers and supervisors should show a willingness to speak with the workers about the whole job,” continues Dr. Newman, a past president of the American Society for Public Administration. “Find out from the workers, perhaps during a small group session over coffee, about the skills they draw upon when facedemotive skills of these workers should be valued as highly as their technical skills, in HR processes such as performance appraisals, evaluation and compensation.”

with tough situations. We found that workers want their boss to understand their whole job--not just the skills that are more easily measured.”

When hiring an emotional laborer

Dr. Newman shares an important trait that a leader should look for when hiring a person for an emotional laborer job.

“The best candidate is the one with self-awareness, the person that knows their own strengths and weaknesses,” she says.

The job candidate who claims that nothing stresses them out will be a poor choice, Dr. Newman cautions.

“A person who realizes there are certain challenges inherent in potentially emotional work will prove to be the better person to fill an emotional laborer position,” she says.

Crisis response, in the public eye 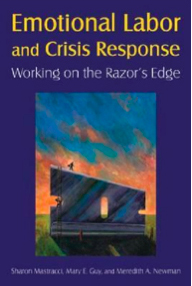 When called upon to report to workers, the public or the press about an unpleasant or tragic situation, the spokesperson becomes an emotional laborer herself or himself. A savvy spokesperson, even with little time to prepare, thoughtfully tailors the message to the audience of ten people or 10,000.Emotional Labor and Crisis Response also reports on how a leader serving as a spokesperson can effectively communicate messages to the public.

“Bad news can be handled if it’s presented well,” Dr. Newman says. “A leader should have emotional intelligence to be able to structure a message that is not just heard but accepted. A good spokesperson refrains from ‘agency speak.’ He or she also should speak in short sentences of few words and repeat the message so people can absorb what it being said. If it’s a tragic situation, the spokesperson should express genuine grief.”

Also on the subject of crisis response, the book explores the subject of a how a leader needs “administrative courage” to do what is needed in certain situations. “Leaders who do their job with excellence are those who are willing to sometimes put aside policies and procedures to do what is needed in a crisis situation,” Dr. Newman comments. “Sometimes they need to make split second decisions and those can call for administrative courage.”

This latest book is a follow-up to Emotional Labor: Putting the Service in Public Service (2008) in which the authors first explored those who have interpersonal contact in often unsettling situations as part of their job.

“There has not been much literature on these extraordinarily different jobs which makes me even more passionate about the subject,” says Dr. Newman who is continuing her research into the subject.